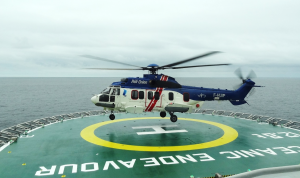 Héli-Union received an Appreciation Certificate to acknowledge its safe and efficient services from its client. The certificate was presented by Woodside’s Company Representative to Héli-Union in February 2016, with a presence of an Airbus helicopter delegate.

The campaign remarks Myanmar’s first offshore operation utilising H225 (formally known as the EC225). The aircraft, operated by Héli-Union, was used for a long range crew change operation that lasted for 3 months. The main mission of the contract was for personnel transportation from Yangoon Myanmar facility to Woodside’s AD7 and A6 blocks, with the furthest distance travelled up to 300Nm per trip.

Héli-Union also provided the first ever LIMSAR service in Myanmar throughout the exploration campaign with its AW139 helicopter, equipped with a capable external rescue hoist.  Just last year, Héli-Union announced its partnership with Priority 1 in launching commercially based offshore helicopter Search and Rescue (SAR) services for oil and gas companies. The service focuses on critical emergency response and support high demanding operations. This enables Héli-Union to offer an improved and comprehensive service to its clients worldwide.

Heli-Union’s history in Myanmar dates back to the 1989 when Héli-Union first entered the developing market for a seismic operation with a PUMA helicopter. Héli-Union continued its activities in the country until 1992 with another helicopter, Alouette. In 2008, Héli-Union decided to return and strengthened its presence in South East Asia by establishing a dedicated office in Yangoon, Myanmar.

Today, Héli-Union continues to maintain a strong business presence in Myanmar. The company deploys several aircrafts in the country from AW139, H225 to S76 C++. Years of experience has given Héli-Union the ability to operate from any bases in Myanmar, as requested by the clients.

With contracts from international oil and gas providers, Heli-Union’s presence in the country grows continuously throughout the years. The company has excelled during 8 years of its full integration within the country and shall continue on providing the best, efficient and safe services for its clients.