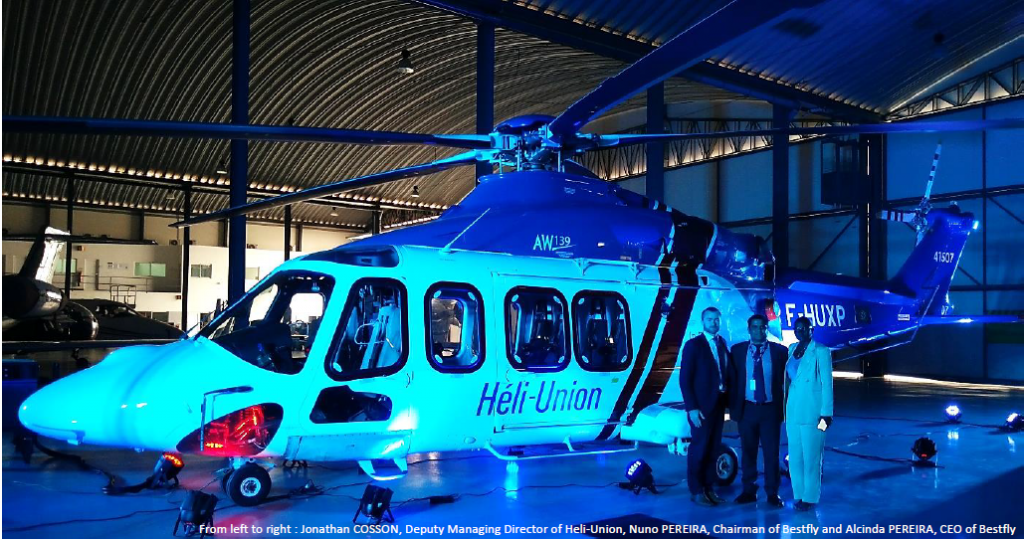 On 29th-30th August 2018, Heli-Union and Bestfly held a demonstration show in Bestfly premises, located in Luanda Airport, Angola, gathering both the local authorities and Oil and Gas companies operating in the country. The participants showed great interests in this latest industrial revolution in Angola.
The demonstration was with an aim to present the strong business partnership between Heli-Union and Bestfly, and their intention to bring forward not only top-notch helicopter services for Oil and Gas Company in Angola, but also determination to contribute to the country’s industrial development.
With 57 years of expertise providing helicopter services to Oil and Gas companies, a past experience operating in more than 60 countries worldwide, and a fleet of more than 40 aircraft located throughout four continents, Heli-Union is a major helicopter service provider. After 20 years of operation in Angola, Heli-Union has decided to consolidate its position by partnering with one of the main Angolan aviation providers and together set a new standard for the industry.
Established in 2009, Bestfly is an Angola-based Aviation services provider. By identifying the room of improvement in the local market, Bestfly is able to create a unique service, where competence, professionalism and efficiency are combined to meet and exceed customers’ expectations. Bestfly is known for its competences in aircraft management, handling, provision of hangarage, operational and flight planning support services.
“We are proud of and strongly believe in this new partnership with Bestfly”, said Jonathan COSSON, Deputy Managing Director of Heli-Union. “With Bestfly’s local knowledge and experience, Heli-Union will be able to reinforce its presence in Africa, especially in a massive oil and gas market like Angola. Together, we thrive on being the best aviation service provider in Angola.”
“We are very excited to collaborate with a world-known aviation actor like Heli-Union. I have the utmost confidence that with Heli-Union’s indepth proficiency of the helicopter industry and our domestic know-how of the Angolan market, we will certainly be able to exceed the expectation of the international Oil and Gas operators in Angola.”, commented Nuno Pereira, Chairman of Bestfly.
Heli-Union and Bestfly intend to deliver several helicopters in the near future to meet the operational needs of the Oil and Gas industry in Angola and to start operations as soon as possible.