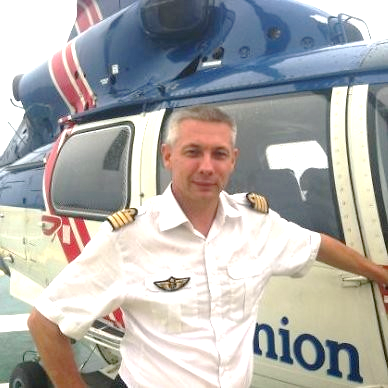 As the Operations Manager responsible for operations of Heli-Union Gabon, Florent Thibaudet is not only a qualified Dauphin AS365N3 pilot, but he also manages daily tasks required to maintain operational excellence at Heli Union Gabon.

As far back I can remember, I have always wanted to be a pilot. For me, it did not matter if it is an airplane pilot or a helicopter pilot. I just want to fly! However, now I understand that once you start to pilot a helicopter, you will not want to pilot an airplane anymore!

I have been working for 30 years in the aviation industry as a pilot. Until today, I have performed more than 10.000 flying hours. My journey with Heli-Union started 10 years ago. Before that, I was working as a pilot for specialised companies that provide aerial work.

I have known Heli-Union ever since I was a child. I would see helicopters with Heli-Union written on them flying around the city, featured in some famous French movies at the time, or even during the Tour de France! For a child who was fascinated by the aviation industry, Heli-Union became one of my dream company to fly with.

At first did not have enough experience to fly with Heli-Union, which was why I decided to start as an aerial work pilot before finally climbing up the ladder and build the courage to try!

I was amazed on the diverse backgrounds of the pilots and engineers in this company. Some of them used to work in the Army, Air Force, Navy, Air Ambulance, etc. and some others who used to work as aerial work pilot like myself. This creates a great atmosphere between the employees. We are able to share our stories, listen to and learn from their exciting experience.

It has been 6 month that I have been commissioned in Gabon. Prior to that I spent many years flying with Heli-Union for many different temporary missions in different bases in Africa. Before Douala I also spent some time in Libya and Congo too!

As an Operations Manager, you have to be a multitasker. You have to take the responsibilities not only as a pilot, but you have to manage the operations, the local crew, some administrative tasks, relationship with the customers on site, and many others. It is not an easy job, but I must say that I love the challenges that come with it.

It is not a secret that the oil and gas market is not doing very well now. Nevertheless I feel that Heli-Union is dealing with this situation quite well by aiming for long term and objective-driven strategy. Heli-Union is able to stabilise its position in the market and minimise the negative effects from this crisis. Of course we all hope that the market improves soon.